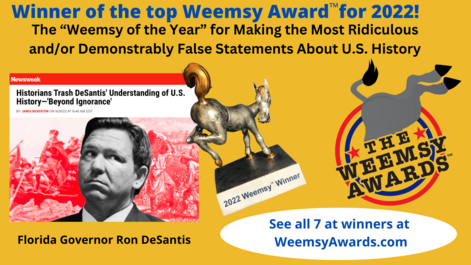 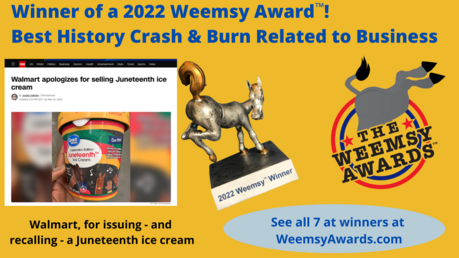 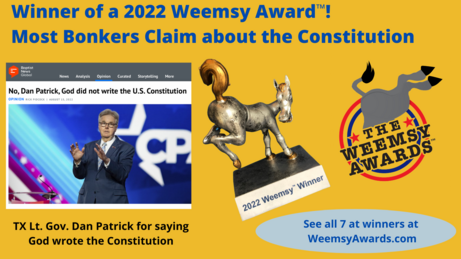 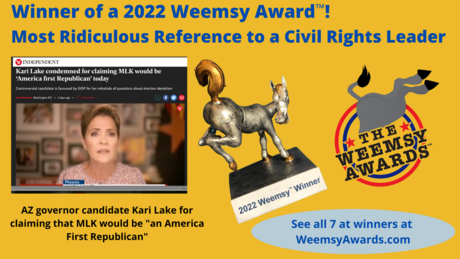 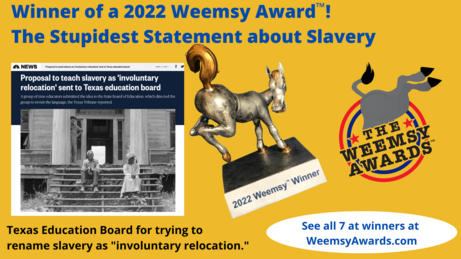 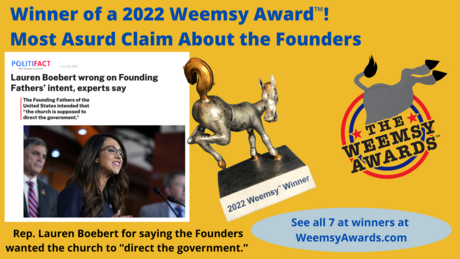 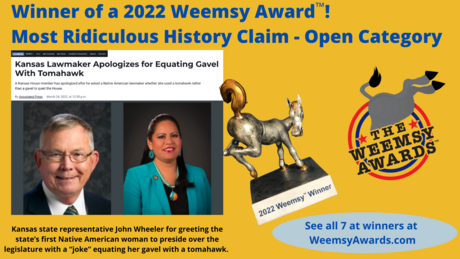 Award #1: The Weemsy of the Year - The Person Who Said the Most Ridiculous and/or Demonstrably False Statements About U.S. History– Florida Governor Ron DeSantis, who earned three nominations in 2022 for: 1) claiming “no one questioned slavery” before the American Revolution.’ 2) saying children shouldn’t be taught that US is built on “stolen land” because “It isn’t true.” 3) pushing for and signing a new civics curriculum that teaches students that slavery in America wasn’t that bad.
Runner-up: Rep. Marjorie Taylor Greene (also the runner up in 2021)

​​
Award #2: The Most Astonishingly Stupid Reference to Slavery in 2022 – A group of Texas educators who proposed a new social studies curriculum that referred to slavery as “involuntary relocation” Story
Runner-up: Florida Governor Ron DeSantis for claiming “no one questioned slavery” before the American Revolution.

Award #3: Most Absurd Claim About the Founders in 2022 – Rep. Lauren Boebert of Colorado who declared that the Founders wanted the church to “direct the government.” Story
Runner-up: Commentator Charlie Kirk for claiming, “We should have church and state mixed together. Our Founding Fathers believed in that.”

​
Award #5: The Most Ridiculous Reference to a Civil Rights Leader - Arizona governor candidate Kari Lake for claiming that if MLK - who supported international cooperation and the UN - was alive today, he’d be an “America First Republican.” Story
Runner-up: Ohio Senate candidate Josh Mandel for telling MLK’s daughter she doesn’t know her father’s legacy.

Award #7: The Biggest History Fail in 2022 That Defied Categorization – Kansas state representative John Wheeler for greeting the state’s first Native American woman to preside over the legislature with a “joke” equating her gavel with a tomahawk. “Thank you, madam chair,” said Wheeler. “I was just checking to see if that was a tomahawk.” Story
Runner-up: Senator Ted Cruz of Texas for attempting to defend former president Trump by comparing the FBI raid on Mar-A-Lago to the IRS pursuing “Al Capone for tax evasion” [ahem,  Al Capone was guilty and went to prison].